Finalist 2013 ARTE International Prize for The Pixel Pitch, Power To The Pixel

Power to the Pixel 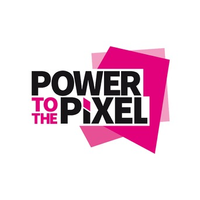 You’re not yet connected with Lisa