Akin Kongi graduated in business and finance.I later went on to study Insurance. I worked in the insurance industry for fifteen years, I left Insurance as the Executive Director of the former Triumph Assurance company Limited. I have been a photographer since he was 18. I moved on to do a few things but got back into the arts when I invested in two films “FOWORA” and “OGBON”. I have since then gone back to film school and graduated form New York Film Academy,I am Photographer/Filmmaker. I have had successful photography exhibitions at the Bogobiri Art Festival in Lagos in 2013, and in 2014 had another exhibition at Terra Kulture which he was invited to do by the organising committee of FELABRATION. I was the first artist in residency at "MILIKI" where I had 2 more exhibitions, my last exhibition was at the Book and Kitchen in London 2017. Since leaving film School I have shoot a film called “Orisa Aafin” in which he was the main lead, Executive Producer, Producer, as well as Director in 2010. This film is due to be released in 2015 along with another feature film I also produced and directed called “Ogere”. Ogere was part funded by a federal government grant. I has done a lot of cooperate work for companies like, MTN, Total, Goethe Institute, West African Power Pool, and some short films and private work. . 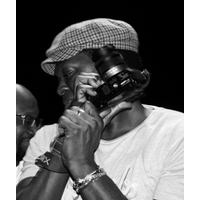 You’re not yet connected with Akin